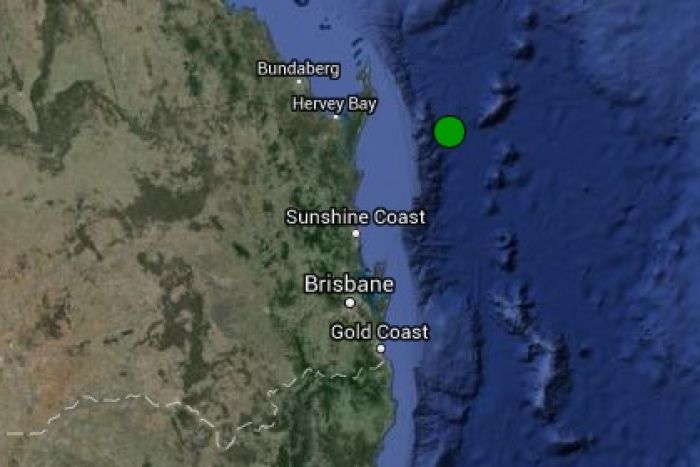 Residents across south-east Queensland reported feeling the tremor just 7.30am.

Originally the tremor was reported as a 3.9 quake, but Geoscience Australia has since updated the quake to a magnitude four.

No tsunami warning was issued for the event

The south-east coastline has been rattled several times since a magnitude 5.3 quake offshore Fraser Island in July.

"At about 7.45am the system detected what we consider a small earthquake," he said.

"This earthquake was located in the area of the cluster where they have happened this year near Fraser Island.

"Since then we have had a dozen aftershocks after that; this earthquake seems to be part of the aftershock sequence."

Mr Maldoni said further aftershocks could occur in the area.

"Considering the past history of what has been happening offshore from Fraser Island, there is likely to be more aftershocks," he said.

He said distinguishing between an earthquake and small tremor depended on size.

"It clearly depends on the magnitude of the earthquake, you would be able to tell the difference if it is a magnitude seven earthquake that would knock your house down," he said.

"Most earthquakes in Australia feel like a freight train going fairly close to the house."

'One after the other they came, and it happened about three times'

Callers to 612 ABC Brisbane thought the shaking was due to large trucks passing by or children running around.

"I actually thought my daughter had jumped up to grab her iPad off the kitchen table that we had taken from her the night previous," he said.

"It was only when you mentioned earthquake on the radio this morning that I realised that was it."

Another caller, Troy from Caloundra, said his television swayed during the tremor.

"It is my day off and I couldn't sleep, and I got up to watch the early morning news on the...large screen TV," he said.

Ted from Buderim said he was in a boat on the Maroochy River when he felt three bumps coming through the hull.

"One after the other they came and it happened about three times and it wasn't the shallow water ... it was pretty definite for me and quite odd," he said.

"There was a little bit of wave action."