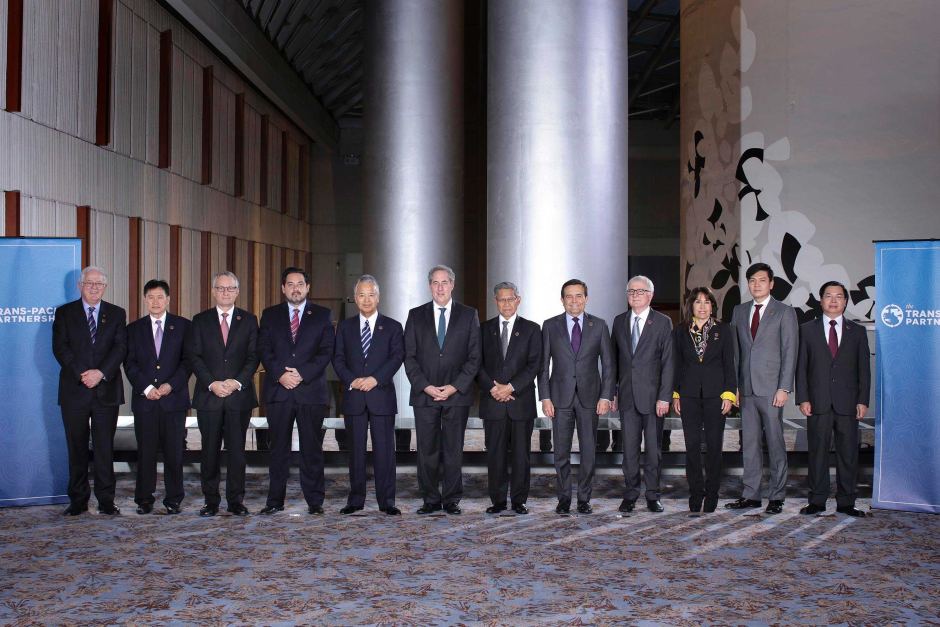 Its Official 12 countries sign Trans-Pacific Partnership & What Australia Gets

Working around the clock for days past their deadline, haggard trade ministers announced early on Monday they had reached agreement on the ambitious Trans-Pacific Partnership just before dawn, capping five years of difficult talks led by the US.

The deal aims to set the rules for 21st century trade and investment and press China, not among the 12, to shape its behaviour in commerce, investment and business regulation to the TPP standards.

'After five years of intensive negotiations, we have come to an agreement that will create jobs, drive sustainable growth, foster inclusive development, and promote innovation across the Asia Pacific Region,' said US Trade Representative Michael Froman.

The hard-won deal to create the world's largest free trade area, encompassing 40 per cent of the global economy, came after five days of round-the-clock talks.

Obama, who made the TPP a priority of his second term, said the accord 'reflects America's values and gives our workers the fair shot at success they deserve'.

'When more than 95 per cent of our potential customers live outside our borders, we can't let countries like China write the rules of the global economy,' Obama said in a statement on Monday.

'We should write those rules, opening new markets to American products while setting high standards for protecting workers and preserving our environment.'

'The agreement is not only important because of the size ... it also pushes the frontier of trade and investment in goods and services to new areas where gains can be significant,' she said.

The accord involves significant market openings from Canada, the US and Japan for farm products from sugar and rice to cheese and beef.

Japan has made major concessions to lower tariffs and reduce non-tariff barriers, a chronic sore point with major food exporters such as Australia, New Zealand and the US.

The US agreed to lower its tariffs on Japanese car parts from non-TPP locations such as China and Thailand, even though that hurts the privileged position in the US market that the 1994 NAFTA trade pact gave Canada and Mexico, both in the TPP deal.

But more broadly, the agreement establishes mechanisms to handle disputes between foreign investors and governments; requires governments to not discriminate between their own state companies and foreign investors in major contracts; and demands countries such as Vietnam, Mexico and Malaysia improve labour standards.

It also addresses new issues such as data trade and intellectual property that have not been covered in multilateral trade pacts of the past.

The talks went four days past deadline to resolve conflicts over Canada and Japan opening up their dairy markets to New Zealand exports, and objections from Australia, Peru and Chile to the US push for longer biologic patent protections.

The negotiators said everyone had given in some areas and gained in others to reach a deal.

Concretely, Fast said, the deal will result in significant reductions of bureaucratic and tariff barriers to trade and investment among the 12 countries.

'Red tape is consuming so much world activity ... this is a massive achievement in reducing that red tape,' he said. TPP 'is going to lead to far more seamless trade.'

The accord still must be signed and ratified by the respective countries, which also include Singapore and Brunei. But that could be a challenge in several of them.

Many of the details of the deal were negotiated in deep secret, drawing persistent criticism that business interests dominated the talks and that the public interest in many countries was being thrown aside.

Trade Minister Andrew Robb has promised enormous benefits for the nation with the finalisation of the Trans-Pacific Partnership.

The 12-nation trade deal encompasses 40 per cent of the global economy and creates the world's largest free-trade area.

Speaking to Sky News, Mr Robb said the TPP was 'by far the largest global trade deal in 20 years, since the Uruguay round.'

He said the agreement is a 'great complement' to the other free trade agreements that Australia has struck with South Korea, Japan and China.

'We have set Australia up for massive diversification and wonderful opportunities in both jobs and growth in the years ahead,' he said.

Andrew Robb says the deal allows Australia to capture a series of new emerging markets, like Vietnam, Mexico and Peru.

The final details of the deal were signed off after five days of round-the-clock talks in an Atlanta hotel.

The TPP, led by the United States and Japan, aims to set the rules for 21st century trade and investment.

China is not one of the 12 countries included in the deal, however the TPP seeks to shape China's behaviour in commerce to the standards set out in the TPP deal.

Mr Robb says it will the broader objective is to combine the TPP with the Regional Comprehensive Economic Partnership (RCEP) which includes China to form a broader Asia-Pacific Trade deal.

He argued that the US was 'keen to see an Asia-Pacific agreement in due course'.

The next big hurdle for the TPP will be the ratification of the 12 nations.

However, Mr Robb said the United States and others have had a very keen eye on the passage of the subsequent legislation when negotiating the deal.

'I feel they have all made a keen political judgement that the deal that we have ended up with does capture so much opportunity for the region... that they are all quite confident that they can get this thing through,' he added.

KEY PARTS OF THE TPP

Farmers will get a major boost with tariffs for beef, dairy, wine, sugar, rice, horticulture and seafood slashed.

Australia successfully managed to negotiate the export of rice into Japan for the first time in 20 years.

Mr Robb says Australia would have liked more sugar in te TPP but said that he is happy with overall deal.

'This time we did succeed in doubling the average amount of sugar that our producers can expect to sell to the US each year,' he said.

Mr Robb said he had also been able to negotiate for increased access for sugar when demand increases in the US.

While conceding the deal was not what he had wanted, he stressed it was a far better outcome than the industry had had for 15 years.

Besides slashing barriers to exports, services and investments, the deal will not make any changes to the five-year data protection for biologic medicines regime.

Andrew Robb said smaller countries had asked him during that negotiation process to 'hold the line' on biologic medicines.

He told Sky News that countries like Peru, Chile, Malaysia and Brunei had stressed that they could live with the five-year period but 'couldn't live with anything higher.'

'They were putting all their hopes on us being able to stand our ground with the US... we did do that,' he said.

'I can tell you that all those other smaller countries ... had a big grin on their face when we shook on this deal.'