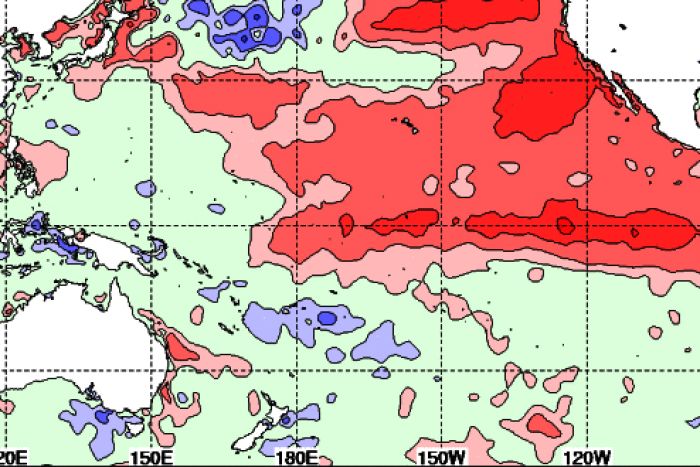 The Northern Territory is expected to have fewer tropical cyclones this season, as the "Godzilla" El Nino building in the Pacific dominates the climate outlook, weather experts say.

The Bureau of Meteorology (BoM) has issued its tropical cyclone season outlook for 2015-16 and said there was a 64 per cent chance of fewer cyclones than average.

BoM manager of weather services Ben Suter said an average of three cyclones formed in the northern region, which includes the entire NT coast, as well as part of northern Western Australia and Queensland, each season.

Three-quarters of cyclones that form in that region hit coastal areas.

Mr Suter said it was too hard to put an estimate on the number of tropical cyclones the region might experience this season, which lasts from November 1 until April 30.

"There is a 36 per cent chance that there will be more tropical cyclones than average," he said.

He said that while there were expected to be fewer cyclones than was typically the case, accuracy in the northern region was very low.

Australia-wide, the BoM also predicted fewer cyclones than the average number, which is 11.

While El Nino is typically associated with fewer cyclones and a later start to the season, there has never been a cyclone season without at least one tropical cyclone crossing the Australia coast
Dr Andrew Watkins, BoM climate prediction manager

"The El Nino is expected to continue into 2016 and typically delays the date of the first cyclone to cross the Australian coast," Dr Watkins said.

But he warned that fewer cyclones did not mean people should be complacent.

"While El Nino is typically associated with fewer cyclones and a later start to the season, there has never been a cyclone season without at least one tropical cyclone crossing the Australia coast," he said.

Climate liaison officer Glenn Cook said the El Nino meant people in the NT were also more likely to experience a longer-than-usual build-up to the wet season this year, with less rain and hotter temperatures.

Early indications are that an El Nino event this year, dubbed the "Godzilla" El Nino, may rival a 1997 El Nino that caused extreme temperatures in parts of the country.

Mr Cook said during El Nino years the Top End of the NT was more likely to see build-up conditions that extend into January or beyond, although he stressed the weather systems did not always behave predictably.

"Arguably there have been years when there has been no monsoon at all, although that is pretty rare," Mr Cook said.

He said that typically during El Nino years the later monsoons led to less rain.

"With less cloud we tend to have more sunshine and so higher temperatures as a result of the heating that occurs," Mr Cook said.

El Nino events can affect the climate across the globe and also usually lead to relatively cooler water around Australia's Top End.

"Typically the oceans have been cooling slightly to the north of Australia, so dropping slightly compared to normal," Mr Cook said.

"The more the amount of energy in the water in terms of higher temperatures, the greater potential for cyclones to develop."

The hotter, drier conditions can lead to more bushfires in parts of Australia, but in Central Australia where bushfires can occur in the NT, the fires were heavily dependent on the amount of fuel that had built up, Mr Cook said.

Mr Cook said rainfall, required for the fuel to build up, had been variable during the year.