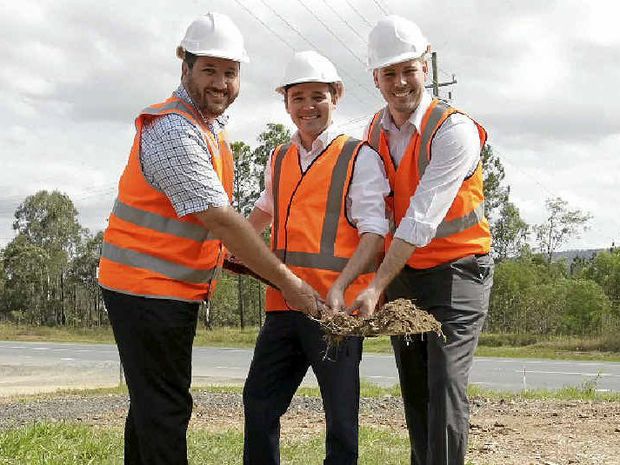 Work has started on the long-awaited safety upgrade of the D'Aguilar Highway near Bracalba.

The first sod of the $16 million Federally funded upgrade was turned on Friday by Member for Longman Wyatt Roy, Member for Glasshouse Andrew Powell and Member for Morayfield Mark Ryan.

Mr Roy said he was extremely pleased to deliver on the highway which he began campaigning for back in 2010.

"It's really positive and exciting to see work starting that will make the D'Aguilar Highway safer for all those locals and other commuters who use one of our region's major transport corridors," Mr Roy said.

Mr Powell was also happy with the progress being made.

"For me this is seven years in the making," he said.

"It's a wonderful outcome for the community."

A 1.2km-long eastbound passing lane will be one of several changes made to the road in the upgrade.

"We will see a passing lane between the Gamgee Road intersections, a rehabilitation of the road - which anyone who drives road can see how bad that is - realignment and improvement of some of the intersections, a review of all the signage along the road and clearing of dangerous vegetation and drainage improvements which will make a really big difference to what is an incredibly dangerous road," Mr Roy said.

Mr Roy and Mr Powell hoped motorists would be patient as the upgrade took shape.

"Roadworks are a fact of life unfortunately. Nobody likes them but everyone likes the upgraded road. No doubt myself will be frustrated driving this road but I'll be very happy when it's finished," Mr Roy said.

Mr Powell said: "It's just the case of allowing that extra five minutes to wherever you're going and know the benefit at the end is going to be worth it."

The upgrade is expected to be finished by late 2016.